The votes for the Next Penguin Color have been counted and the winner is aqua!!! It’ll be pretty awesome to wear around another sweet color…

It will be available in the next Penguin Style catalog which comes out tomorrow. Here’s my challenge for you. 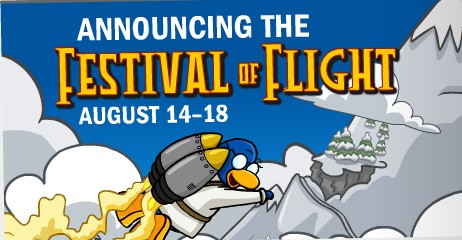 The new Club Penguin room has unofficially been announced. It will be the Tallest Mountain, like everyone believed. On August 14-18th Club Penguin will lift out of the water for the Festival of Flight! That’s right, we will be flying up with Jetpacks, balloons, propellers, and other crazy stuff. Gary says it will help us avoid the massive flood. Be ready to lift off on August 14th! Maybe we will get to meet Gary.